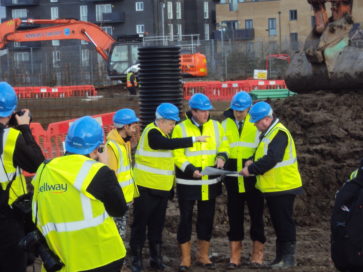 Prime Minister David Cameron visited Barking Riverside this morning, as he announced plans to build up to 13,000 homes on public land.

The package of measures could benefit at least 60,000 more people into home ownership and includes doubling government loan support under Help to Buy, alongside an expansion of shared ownership across the capital.

Mr Goldsmith, MP for Richmond Park and North Kensington, said: “Barking Riverside is one of the most ambitious and important new developments in the UK.

“This area was left derelict for far too long. The government has invested in bringing London Overground to the area and this transport link has kick-started the building of new homes Barking and London desperately needs.”

A third consultation is currently underway to extend the Overground line by 2021, while planning permission exists for 10,800 homes in the area – the largest brownfield site in the east and part of the London Riverside Opportunity Area scheme for the city’s future growth.

“We are spearheading the capital’s eastward shift and today’s visit by the Prime Minister is another sign of this reality.”

The first wave of the government’s new housing scheme will see construction on public land in Dover, Chichester, Gosport, Northstowe in Cambridgeshire and Old Oak Common, north west London this year, it was announced.

Mr Cameron said: “This government is taking unprecedented action to help hard-working people own their own home and nowhere is this more important than London.

“I know that Zac Goldsmith has placed tackling London’s housing problem at the heart of his campaign and I look forward to working with him to deliver this policy.”